Sharing a smile with the world

Our heritage and culture are important when it comes to who we are…  Back in the late 1980s I began thinking about how the “Little” family came to be.  I could remember my Grandparents, Uncles, Aunties and Cousins but it was difficult to gather any information about them and their various interests, aspirations or lifestyles.  Some of what I knew and or discovered caused me concern and became a driving force in my own living.  I decided to investigate the “Little’s” and find out what I could about them. In 1990 New Zealand celebrated its sesquicentennial, 150 years since the signing of The Treaty of Waitangi.  I began asking questions about our connections in early Aotearoa. So where to begin.  The picture below Right is my parents Joe and Flo on their Wedding Day at Milton  ’18 November 1942′.   My Grandparents  William & Margaret Little of Outram and Maungatua on the Taieri Plains of Otago are in the middle and my Great Grand Parents James & Grace on to the Left.  — 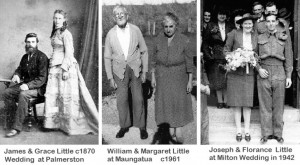 James Little and his brother William came to Dunedin from Scotland

Like so many of their time ‘James & William’ went to the Tuapeka Gold fields and soon made a living,  It is worth thinking about the experiences of  James and William in context.

There is an excellent Goldmines Database which is a fully searchable and available free-of-charge at http://www.kaelewis.com  This database, is solely the work of Kae Lewis, (c) and contains the names of more than 50,000 gold-miners who were mining in the New Zealand gold-rush during the years 1861 – 1872.  It includes names from mining records of both Otago (1861 – 1865) and Thames (1867 – 1872).   In addition Kae has a collection of articles and stories about the goldfields of New Zealand which are well worth reading. Kae has developed this helpful site over the past decade.

Our ancestors James and William Little ultimately invested in a number of interests at Palmerston Otago. Their name and Trading Style ‘Little Bros’ appear widely over the original Town Block Plan for Palmerston. 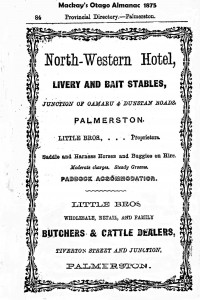 The above is reproduced a 1875 Almanac.   James and his brother William initially settled at Palmerston which is  50 kilometres north of Dunedin and the largest settlement (Population 890) in the Waihemo Ward of the Waitaki District.     In the mid 1860s my Great grandfather James Little and his brother William invested in procuring land in the Palmerston Town Grant as indicated in the map below. 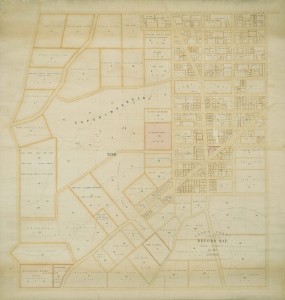 This small community is on the banks of the Shag River near  Puketapu Hill. “Palmerston” Otago  was surveyed  from 1862.   The ‘shag’  river’s Maori name is ‘Waihemo’.    Besides their ‘Livery Stable’ and other business interests my ancestors operated an hotel known as the ‘North Western’.  The first building was destroyed by fire but there is still an Hotel on the site. 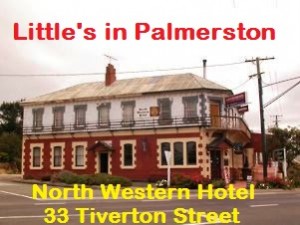 Today’s generation can often overlook the importance of due respect for our Ancestors.  James and Grace Little are buried at West Taiere Cemetery, Outram in a plot only marked with the word “Little”.  Here is a picture of the grave site and its sole word stone.

Click picture to enlarge    Below is the grave stone for James & Grace Little at Outram. 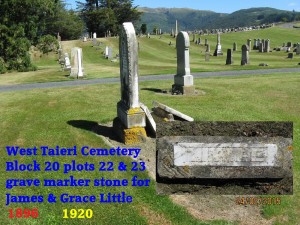 James and William came from a small village in South West Scotland ‘Wanlockhead’.   In April 2006 I had the once in a life time privilege of visiting their home village  where I also located their parents and Grandparents graves side by side in the old Meadowfoot Cemetery.   The photograph below is me standing  beside my  ancestors graves in the old Meadowfoot  cemetery at Wanlockhead, Dumfriesshire. 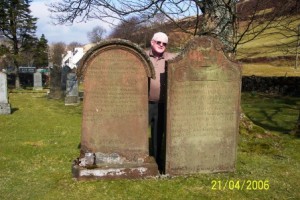 There is more information about Wanlockhead  on Wikipedia.  I encourage anyone who is interested to read the article published there.  Wanlockhead in 1862-63 was a Village of hardy people  from amongst whom my Gt Grandfather James Little  came.   It’s a long way back from here to there in yesteryear …   If you are interested in our family heritage and culture please make contact with me by using the Free-Contact Tab on this site.   For any it might interest,  I’m the New Zealand / Australia contact for Clan Little details of which can be read on line at www.littleclan.net

I have spent a lot of time thinking about our Scottish roots but there was  someone who was very special to  us her grand children…. I refer to our ‘Granny’   ‘Margaret Little’ (SNR) 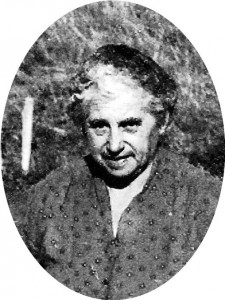 Our Granny Margaret Buchols (Bucholz)  who was born in Gore NZ on 25 July 1891,  married my Grandfather William Little on 27 November 1912 at Wyndham,  New Zealand.

Here is the Grave stone of my Grand parents William Little and Margaret at West Taiere / Outram. 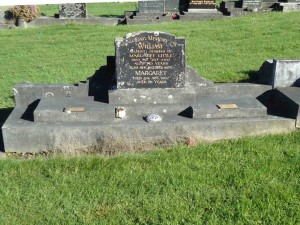 Family – Lubiszewo-Tczewskie; Joseph Michael (1867-1952), Małżewko; Angelica (Helen Amelia) (1869-1899) & Anna (1871-1871).  From Małżewko the family left for Hamburg where they set aboard the “Palmerston” 29 Jul 1872 arriving at Port Chalmers, Dunedin, 6 Dec 1872.  Listed aboard were Johann Buchholz 31, Anna 28, Joseph 4 & Amelia 2.  During the voyage Anna gave birth to a baby girl – Mary (1872-1939).  The family was sent south to Scroggs Creek on contract work with Brodgen & Sons to lay the southern railway through the Taieri.  By mid March 73’, they were residing at Waihola.  In mid 1874, Johann was successful in the ballot for a 200 acre section of land to the north east of Gore.  He drew the third section on the McNab run from the East Gore boundary on the highway known as Symes and Pinnacle Road.  He was soon joined by a considerable number of his fellow countrymen & looking round in search of a place where they might pitch their tents without trespassing on private property they came upon the coal reserve along Johann’s farm and divided his property for purchase 28 Feb 1878.  Johann took up work on the southern railway line in the Gore region.

Johann is recorded as purchasing section 30 in the North Harbour & Blueskin (Pine Hill) district near Dunedin 17 Sep 1890 and was naturalised as a New Zealand citizen 8 Sep 1902, a farmer, residing at Gore.  Johann died 7 Aug 1926 at Seacliff aged 84 and is buried at the Gore Cemetery.

Joseph Michael Bucholz m. (25 Oct 1911) Church of the Sacred Heart, Allanton, Nellie Woolliams.  He worked at times as a farmer and coal miner.  He died 29 Dec 1952 at Mataura aged 85 and is buried at the Gore Cemetery.

The family left the village of Malsau for Hamburg, via Gdańsk, aboard the ship “Palmerston” on the 29th of July 1872 to arrive at Port Chalmers, Otago, New Zealand on the 6th of December 1872.

I do not know the Polish language so maybe I should try and learn something of it first.  What I would like to understand is where my ancestors came from and why they might have opted to move to New Zealand.  Geographically where is the place they were living and how is it named or described today.

FROM about 1875 to the late 1890s a settlement known as Germantown was situated at Whiterig, East Gore.   There is little trace of the settlement today but in its heyday the area housed between 20 and 30 mainly Polish immigrant families.

Polish Heritage of Otago and Southland Charitable Trust  historian Paul Klemick spent 12 years researching the family history of the Polish immigrants who came to Otago and Southland in the 1870s, some of whom lived in Germantown.   I am partiocularly thankful to Paul for his efforts to save and tell the story of our Polish Ancestors.

Mr Klemick said even though the town was called Germantown there were more Poles there than Germans.

‘‘The majority of them were Polish,  there were some Germans like the Voights and Lietzes [and Gutschlags],’’ he said.   Poland did not exist as a nation from 1775 until 1914 after the Prussians invaded and occupied the land, which was why the Poles spoke German, Mr Klemick said. ‘‘Polish was forbidden to be spoken in public so they would have to learn German,’’ he said.

The early Polish immigrants, many of whom came from West Prussia, came to New Zealand to work on farms but because they often had families with them and did not speak English very well, they had trouble finding work.  When there was a shortage of reliable workers to build the railway from Dunedin south, the men got a job there. The Poles were very hard workers, Mr Klemick said.

A report read by August Reinke at the Gore and Surrounding Districts Early Settlers Association in 1937 described how Germantown came into existence.   Mr Reinke said John Bucholz, a Polish immigrant, won a ballot for 200 acres (80.9ha) of land from the McNab run when it was released by the Government. Building a house was the first priority of the settlers who won ballot land, Mr Reinke said.  ‘‘In quite a lot of cases it was a sod house of from two to four rooms that was erected,’’ he said.   Mr Bucholz later subdivided the land and sold it to Wilhem Voight, Michael Lietze, August Regejske (the anglicised version of Rydzewski) and John Dovalofske.

About this time the Clinton – Gore railway line was being built. Needing a place to pitch their tents the railway workers chose land in the Whiterig coal reserve that ran alongside Mr Bucholz’s land. Huts and houses were later built on the land that was not suitable for mining.

Some of the immigrants applied for mining licences and used to cart coal into Gore, Mr Reinke said.

By the late 1890s many of the Germantown residents had moved on.   An article in The Ensign on October 24, 1980 said the only reminder of Germantown was a few of the family names.

In an effort to understand the place of my Granny’s ancestors,  I have found the following Youtube Videos.  ’45 Interesting Facts about Poland’    and ‘An Animated History of Poland’  .

This clip “History of Poland” is a video created by a famous author T. Baginski and was highly praised.

This section of Kiwilittle.net is a work in progress for which any suggestions are  welcome.